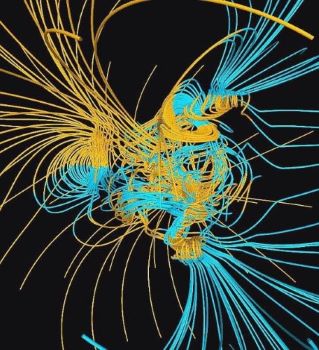 In my BOOK OF RUIN science-fantasy series, superflares from the sun inundate the world, crashing electronics. Endless solar storms prevent electrical machinery from being repaired. Humans are thrown into a “medieval” dark age.

A magnetic field produced by the Earth’s rotation around its liquid iron core usually protects the planet from solar winds and coronal mass ejections. That is why life on Earth thrived and did not on Mars, which has no magnetic field. However, solar storms at times have broken through this magnetic swaddling, allowing its currents to ravage electrical machinery.

This happened in 1859, 1989 and 2003. In 1859, solar winds tore through the atmosphere to wreak havoc on the world’s telegraph system. “Streams of fire” poured forth from circuits, igniting papers and striking telegraph operators. In addition, telegraph contacts melted, batteries spewed sparks and people living in Havana and Jamaica saw auroras. The disturbance lasted for eleven days. In 1989, a solar storm with the energy of several thousand nuclear explosions jammed radio signals and threw the province of Quebec into a twelve-hour blackout. In 2003, an ejected coronal mass struck Earth, badly damaging South African and Swedish transformers. Radiation alerts redirected aircraft away from the poles. Magnetic and geophysical surveys ceased functioning. The US military canceled a sea mission because communication satellites were disabled.

Scientists believe a powerful superflare could destroy modern electrical and communication grids. “Power plants would go down, substations would go down, transmission lines, cellphone towers, would go down,” Randall Carlson, a cosmological researcher and founder of the Cosmographic Research Institute has said. “There would pretty much be a collapse of the electronic grid system we all depend on…This would mean that large portions of the planet could be plunged into total darkness, with no electricity and no means of communication.”

I knew all this when I wrote my first novel. I wish I knew about Alanna Mitchell’s book THE SPINNING MAGNET. Mitchell points out the Earth’s magnetic poles may be on the verge of flipping, which means the magnetic field will no longer flow north. It will stream south.

Pole reversals have occurred numerous times in Earth’s history. The last switch occurred 780,000 years ago. The change does not occur overnight. The transition can last millenniums. During the transition, solar winds will have a greater impact because the Earth’s magnetic shield is weakened. Deadly solar energy particles will reach humans at spots. Mitchell said she could envision “cancer communes springing up like the leper colonies of old. Or refuges for the radioactively poisoned or for teenagers whose brains the rays have pushed to early dementia. Will suits of stiff black crayon be all the rage?” The crayon she refers to is protective cloth that shields a person from radiation.

The planet also might go from having one set of magnetic poles to many, creating competing magnetic fields that flow in dissimilar directions. The location of a compass will determine where it points. Species that relied on geomagnetism for navigation, such as bees, salmon, whales, and pigeons, would have to evolve to survive.

How would people describe such a life? I introduced multi-magnetic poles in my second novel, THE FLASHFALL SWORD, and continue to explore their impact in my third book, RANGERKNIGHTS. My characters talk about thick-sky days, when sunlight is normal, and thin-sky days when the sun’s radiation burns exposed skin. Cancer colonies exist. Protective cloth is an expensive commodity, and navigators know compasses don’t always point north. At some locations, the needle points southwest; other places, east. Messenger pigeons have evolved to recalibrate their magnetic sensibility to keep track of the various magnetic fields.

I consider myself somewhat scientific clumsy, and as a fiction writer, I am aware that I take liberties with the science. What fascinates me, however, is how such a world would affect commerce, politics, and communities, and despite it all, how courage, loyalty, and love would endure.