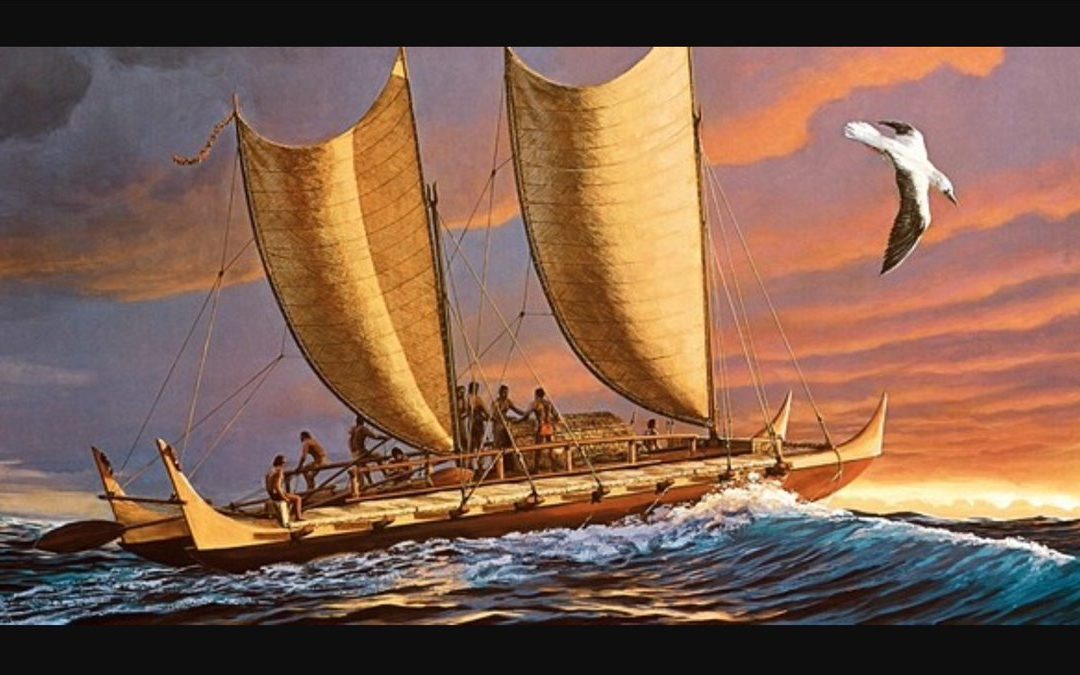 Our uber-technologies have isolated us evermore from the natural ways of our world. Could we today do what the Polynesians did several thousand years ago? Lacking maps, sextants and compasses, they traveled from Asia to Tahiti, Hawaii, Easter Island and finally to New Zealand. I remember sitting outside police headquarters sharing a soda with a buddy when a young officer drove up. He said he was told to bring his prisoner to the west door.

“Is that the west door?” he said, referring to a nearby entrance.

My buddy broke out laughing. He pointed to the setting sun whose rays illuminated the door. “What do you think?” With GPS so pervasive, I fear many people soon will forget how to read a paper map.

If modernity does collapse into a Dark Age, which occurs in my novels, we may never again figure out how to navigate the vast Pacific using just the sun, stars, seasonal currents and tides. We must figure out, however, how to survive without industrialized medicine and manufactured pharmaceuticals. Doctors will return to the time when they receive their training through apprenticeships. Apothecaries must once again learn about botanical drugs. If they do not, life will become nasty, brutish and short.

Most people (including me) can’t name the species of plants in our backyards, and which one cures or poisons. So, when I run across examples of folk or low-tech medicine, I plug them into my storyline.

For example, humans have utilized the yarrow herb since the Trojan War. The flowering plant has been used to staunch bleeding from war wounds. An excellent styptic, yarrow is an anti-inflammatory, pain reliever and antimicrobial. Yarrow can be dried and stored as a powder. Fresh leaves, after a quick chew that activates its clotting properties, can also stop bleeding.

Similarly, Hedge Woundwort – a coarse hairy foul-smelling weed – has been used since the Roman times to heal wounds. It also reduces the ache in joints when made into an ointment.

In my first book, THE BOOK OF RUIN, a healer treats a sword wound with moss that contains penicillium molds. Many ancient cultures independently discovered the useful properties of fungi and plants in treating infection. Chinese and Greek physicians pressed moldy bread against wounds to prevent infection. In Egypt, they utilized crusts of moldy wheaten bread and medicinal earth.

The healer in my story also sedated a wounded ranger with wine infused with belladonna juice. Belladonna is a plant that has been used medically for millenniums. Also called nightshade, the plant is poisonous. Assassins have placed its juice in drink or on the tips of arrows. Processed correctly, however, the belladonna can be used as a sedative and a surgical anesthetic.

In my second novel, THE FLASHFALL SWORD, tattoos on my hero’s back reminds an acupuncturist where to insert needles to reduce pain from an old injury. The idea came from the tattoos found on the Iceman; a mummified man found in the Italian Alps 5,300 years after he died. His tattoos were simple horizontal or vertical lines. Scientists believed the tattoos served a therapeutic or diagnostic purpose because they clustered around the lower back and joints — places where the Iceman suffered from joint and spinal degeneration. One researcher said approximately 80 percent of the tattoos overlapped classical Chinese acupuncture points. Researchers also believe tattooing alone might relieve pain.

Two low-tech practices I describe in my books come not from ancient history but from treatments that arose out of the Afghan and Iraqi wars. At the end of THE BOOK OF RUIN, a cleric treats the hero’s PTSD by having his eyes track a finger moving back and forth. While doing so, the hero describes a recurring nightmare. This treatment is called EMDR, or eye movement desensitization and reprocessing, and it seems to reduce traumatic anxiety. Researchers are uncertain about how it works. Some suggest EMDR is similar to REM, rapid eye movement, which occurs during sleep. REM helps process memories and leaves the person refreshed after sleep.

In RANGERKNIGHTS, currently being written, warriors use auricular acupuncture on the frontline to decrease pain. This idea came from discovering that the medics use battlefield acupuncture to reduce the opioids given to wounded soldiers. Small needles or darts are inserted in five specific sites in one or both ears. They supposedly influence how the nervous system processes pain. This auricular therapy also may cause the body to release chemicals that encourage numbness and fight inflammation.

I describe battlefield acupuncture to a longtime practitioner of Aikido. She pulled out of her bag a plastic case containing the auricular needles. She brings them to Aikido class in case a student is hurt and needs relief from pain. Obviously, not everyone is estranged from the natural ways of our world.