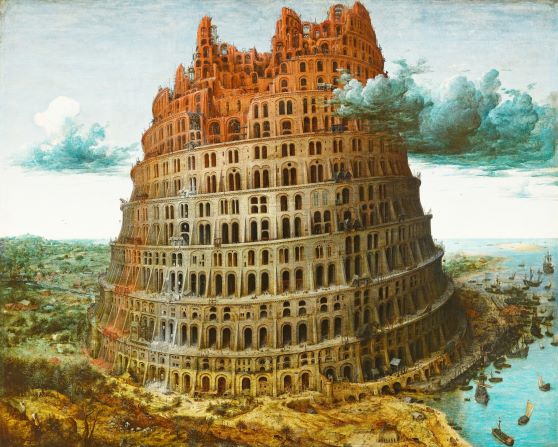 THE TOWER OF BABEL

In the Book of Ruin novels, I portray a post-apocalyptic world that emerges from our modernity. I enjoyed speculating about what would be different and familiar, forgotten and remembered. I am surprised, however, about what depictions upset readers. Some have objected to my claim that those living during dystopian times would forget how to make smokeless gunpowder and magazine-loading guns. I laid out my arguments for why I believe this in a past blog. (In my latest novel, RangerKnights, a Teutonic gunsmith, several hundred years after the Flash, finally rediscovers smokeless gunpowder and carbine manufacturing).

A reader recently took issue with another aspect of my worldbuilding – that the English that NATO Americans spoke in Germania evolved into a separate language called American. In my first novel, The Book of Ruin, the break between English and American was not complete but had begun. I slipped in a twisted Easter egg when I wrote that a university and boarding school were nestled inside the English Quarter, so named because the classical language of learning was English. The English Quarter is based on the Latin Quarter. During the Middle Ages, European universities were said to exist in Latin Quarters since professors and students spoke and studied in Latin.

The reader who took issue with me wrote, “Any event originating from the sun that disrupts life on Earth is not likely to alter language sufficiently to be considered a new language.” Although he did not say so, he probably was upset that in the novel RangerKnights, Americans in the United States also no longer spoke English. Instead, they spoke a creole, as different from English as the Haitian tongue is from French. I understand why many living during our relatively stable, modern age see society as resilient. But I see culture, which includes language, as fragile.

All languages evolve. They are never static. We probably would have a hard time understanding the English spoken in Shakespearean England. As a white rookie police officer from the Midwest, I did not always understand the African-American English spoken in Miami-Dade’s innercity. Although all Germans learn in school what is called High German and hear it on TV and radio, regional dialects persist. A German from the northern part of the country traveled to Bavaria. When he checked in at a pension, the clerk talked to him in Bavarian. He said he did not understand her. She replied, “You are in Bavaria now… and people speak Bavarian here! Get used to it!”

An empire’s language can become a lingua franca, a common second tongue that different peoples speak to communicate. Alexander the Great’s conquests made Greek a lingua franca. Roman legions and straight roads pushed Latin to the top of the language heap. Arabic spread far and wide during the Islamic Golden Age. The British and American empires made English the modern lingua franca.

But what happens to a lingua franca when an empire falls, roads crumble, fleets and planes no longer sail and fly, Internet, TV and phone networks permanently crash, and another great power does not fill the vacuum? The lingua franca splinters and mutates in all sorts of ways. This is what happened to Latin after the Roman Empire fell. Latin became French in Gaul, Italian on the Apennine Peninsula, Spanish and Portuguese in Iberia, and Romanian in Transylvania, Moldavia, and Wallachia.

Worldwide empires fell in my novels. A continual series of solar storms destroyed power grids and electronics. Holes in the ozone layer created cancer zones. The world was reduced to city-states and regional startups.

I must add a postscript. Two women book reviewers from the United Kingdom took issue with a scene in RangerKnights where a female warrior protagonist wearing a full-body burqa sneaked into an enemy town. After reaching a safe house, the character removed the burqa. She discovered that blood had stained her pants from the pelvis to the knees. “I guess my period started a little early,” the character said, doubling over with laughter.

The scene jarred the reviewers and colored their entire view of the novel. One said the scene was “not at all realistic.” Both reviewers said the book could have benefited from a female editor and beta reader.

My editor is female, and several of my beta readers are women. The scene is based on an actual event described in Ashley’s War, a non-fiction book about the first American women who went through Special Forces training and deployment. Author Gayle Tzemach Lemmon described the incident this way:

“And then she looked down and saw that her pants were soaked in blood from her waist to her knees…And then she burst out in laughter. She had been out there in the field for well over twelve hours and had somehow missed the fact that her period had started hours before.”

I partnered up with several women during my thirty-year career policing Miami-Dade County. Several told me it was not uncommon for a female cop to approach another to ask if she had any protection because a stressful event, such as a physical confrontation or foot chase, had triggered an early period. One particular partner also said that such incidents, for her, could start a second cycle in the same month on occasion.