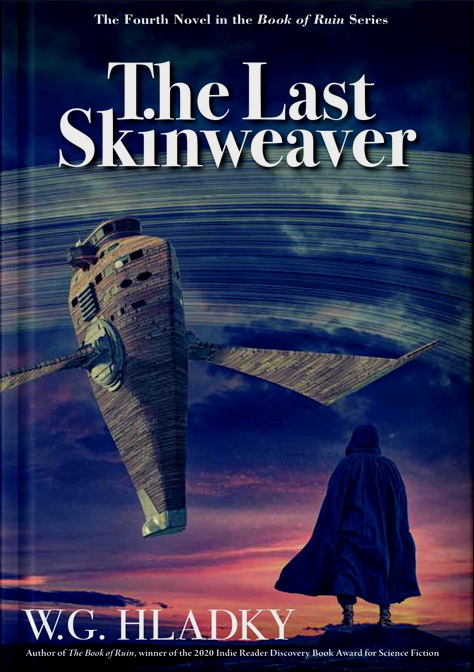 The fourth novel in The Book of Ruin series, THE LAST SKINWEAVER, is out in Ebook and paperback.

The novel is about Roge Callan, who to escape his father’s despotic claw, changes his name to serve as a sergeant under a banished RangerKnight. They live among former enemies, the Skinweavers, who seek help to find a path out of their barbaric tribal past.

But the benevolent Widow Witches and their sentient Yetis have gone missing, and only someone with Widow Witch blood can find and rescue them. Unbeknownst to Roge, he has the blood and is the League of American Castles’ only option. In a hobbled and sabotaged swiftship called the Drunken Stork, Roge pulls together a small crew of misfits and travels from Mitteleuropa to Russia to the Middle Kingdom. They confront along the way ambushers, pestilence, vicious chimeric predators and titanic storms.

However, Roge is not the only one with problems.

Thousands of dead Han soldiers keep disappearing after battling brutal steppe invaders. Plus, alien-looking outlanders are stalking the Middle Kingdom in powerful skyships no one can match. All the while, court intrigue, well-guarded secrets and backstabbing keep Luminous Emperor Zhong Ren from learning the meaning of his diviner’s mysterious predictions.

The novel includes pictures of the Drunken Stork, maps and a Weir family tree that covers all the generations.

This is what editorial reviewers are saying about THE LAST SKINWEAVER:

The world-building here is intricately done, well thought-out, and believable, with multiple cultures interacting according to their own particular views and needs…The story is full of action, with excitement and danger at every turn, and the main plot unfolds as a series of little events whose relevance and relation to larger events is revealed, bit by bit, as the story goes on. In the end, mysteries that have been hidden since the beginning of the series are revealed, and the epic drama comes full circle and finds a solid and satisfying resolution. — Catherine Langrehr for IndieReader.

Over the course of the novel, Hladky offers prose that’s measured and assured, and his action-packed narrative enhances the story’s enjoyable mix of court intrigue, dirty politics, well-guarded secrets, and backstabbing. Although the story echoes many other dystopian tales (including the almost middle-earth-ish settings), Hladky manages to carve out new territory for himself, constructing a story that is able to stand on its own. His knack for blending the fast-paced lingo of paramilitary thrillers with the intriguing worldbuilding of sci-fi and fantasy keeps the pages flying. Throw in the sharply drawn characters, atmospheric setting, and the roller-coaster pacing, and you’ve got a winner. Readers will be enthralled. – The Prairies Book Review.

The Last Skinweaver is a spectacular addition to The Book of Ruin series…The pacing is fast and satisfying and in line with the previous books that are generational. There are loads more characters, and all of them feel authentic…Dedicated Book of Ruin readers become armchair tourists again in the cinematic descriptions. – Asher Syed for Readers’ Favorite.