We WEIRD People: How the West Became Psychologically Peculiar 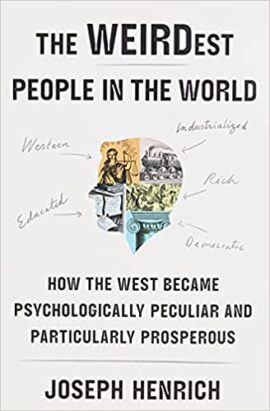 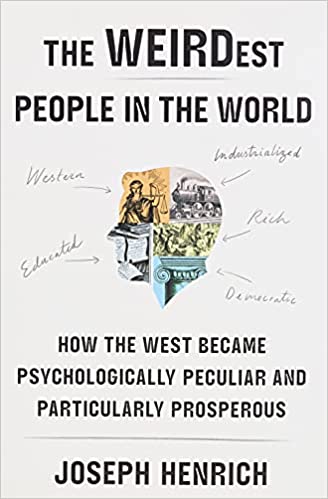 Writing has prevented me for some time from posting. Since the fourth novel in The Book of Ruin series is now with beta readers, I have time to reflect.

What’s on my mind is Joseph Henrich’s fascinating but overwritten book, The WEIRDest People in the World. WEIRD people are Western, Educated, Industrialized, Rich and Democratic. In other words, those of us who live in North America and Europe. The book’s main thrust is that the rise of Christianity undermined tribal or clan societies by stressing loyalty to the Church over kinship. Europeans became more individualistic because they worried less about what the family and clan thought than their reputation in the wider community.

Many good things came from this switch. Getting out from under stifling kinship traditions fostered openness to outsiders, trade, innovation, new institutions and greater economic prosperity. However, Henrich points out only a small percentage of countries are truly WEIRD. Loyalty to families or clans and their power to shape reputations still dominate most societies. This is especially true in Asian countries.

Many have argued that humans naturally yearn to be members of a tribe or extended family. In his book Tribe: On Homecoming and Belonging, Sebastian Junger claims native Americans rarely ran away to join white society. Emigration always seemed to go from the civilized to the tribal. He also points out that cohesive and egalitarian tribal societies do better at mitigating the effects of combat trauma than does “modern society.”

I believe we WEIRDers have lost a quality of life. We have become too atomized, separate from others. My brother and my wife’s sister reside in California, and her brother lives in Ohio. I cherish my relationships with them from my perch in Florida, but none have met each other. That would not have been the case with an Asian extended family.

To compensate, WEIRDers have replaced kinship tribes with voluntary organizations. One of my tribes is a local Aikido dojo. The husband and wife who run the dojo are the dojo’s patriarch and matriarch. Its members come from all over the world, including Russia, China, Germany, Italy, North and South America and the Caribbean. They party together, swap jokes, and gossip on WhatsApp as if part of a family or clan.

Although modern society has gravely disrupted our social bonds, we are strongly wired to be part of a group larger than ourselves, especially when we share adversity. That is why first responders and soldiers, after experiencing shared trauma, forever become brothers and sisters. To paraphrase Junger one more time, the willingness to place oneself in harm’s way for another is a form of love that even religions fail to inspire.

Hence, cops who policed the violent streets with me comprise my other tribe. Although we are retired, we still keep in touch, and our opinion of each other is more important than what our kinfolk thinks of us.

A lone “John Wayne” type of hero does not exist in my novels, just as they do not exist in the real world. My stories describe a protagonist who gathers warrior-companions around him to help him in a quest. They go forth as a family. Such will be the case in my new novel, The Last Skinweaver. As the African proverb says, If you want to go fast, go alone. If you want to far, go together.