Indie Reader Author Interview on writing The Book of Ruin 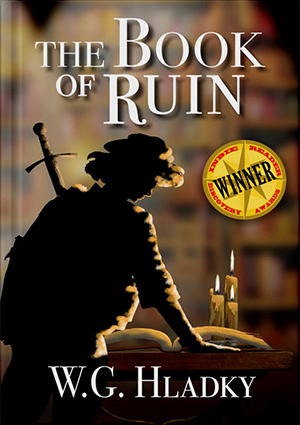 THE BOOK OF RUIN was the winner in the SCIENCE FICTION category of the 2020 IndieReader Discovery Awards, where undiscovered talent meets people with the power to make a difference. Following find an interview with author W.G. Hladky.

What is the name of the book and when was it published?

What’s the book about? Give us the “pitch”.

After solar storms plunged the world into a Second Dark Age, descendants of American soldiers trapped in Germania defend the last NATO outpost. Mysterious people called the Vucari emerge from the Asiatic Steppes. NATO sends Senior Chief Loveboy Weir and a team of rangers to investigate.

Traveling in anti-gravity “skimmers,” they visit the beautiful city-state of New Reykjavik, mountains where giant eagles are used to hunt enemies, and a floating monastery where monks protect the Book of Ruin. They also encounter Vladimir the Resurrected, the Vucari’s warrior prince, who claims to want peace but leaves devastation wherever he goes. Weir struggles to convince NATO not to trust Vladimir. While politicians and clerics make backroom deals to appease Vladimir, Weir and his friends prepare for war they fear is coming.

What inspired you to write the book? A particular person? An event?

While living in Germany many years ago, I constantly drove by medieval castles, ruins of Middle Age fortresses, and well-preserved medieval towns that feudal knights time-warped to the present would feel comfortable visiting. And occasionally, I would pass a Fernsehturm, a German TV tower. They are different from those in America. The most famous one is the twelve-hundred-foot tall Fernsehturm in Berlin. However, not all are located in the cities; many dot the countryside. They are reinforced concrete spires that support spherical or cylinder-shaped structures just below upward thrusting antennas. These structures have multiple floors and elevators, and many contain restaurants.

Conditioned to seeing so many medieval ruins, I at times saw the Fernsehturms not as modern structures but as just more medieval edifices. When I found myself in that alternative mindset, I rattled the marbles around my head to get back to reality. However, the experience got me to wonder; what would become of Fernsehturms if modernity collapses, sending the world into a Dark Age? Would the locals tear them down and quarry their material to build shelters, much like what happened to many Roman structures after the fall of the empire? Would their ground-level foyers become stables for farm animals?  Or would the new nobility and clerics use them as castles, palaces or churches? My novel grew out of those thoughts.

What’s the most distinctive thing about the main character? Who-real or fictional-would you say the character reminds you of?

The main character is a paladin, but not “the lone hero on horseback.” He leads a tight-knit team of warriors, where loyalty and honor bind them tightly together. Sebastian Junger wrote that a soldier’s willingness to die for another “is a form of love that even religions fail to inspire.” That is true in life and in my novel. Such love also is my protagonist’s weakness. Death of loved ones cuts deeply into his soul. Who does my protagonist remind me of? Of every honest cop who I worked with during the cocaine-cowboy days. Policing Miami back then was similar to urban combat.*  And those who stayed by your side while responding to shootings, riots, and fights, and who rushed you to the hospital when injured, forever became your brother or sister. I tried to capture those bonds in my novel.

What’s the main reason someone should really read this book?

To enjoy an adventure story that takes the reader to exotic places filled with interesting characters.

If they made your book into a movie, who would you like to see play the main character(s)?

I based many of my characters on real people I knew, i.e. Dom, BT, and Parker Jones. Maybe Mahershala Ali could play Weir. I view Weir as an everyman doing his duty, much like the Tom Hanks character in Saving Private Ryan. I did base Colonel Eleanor Patterson on how Robin Wright carried herself in the TV series, House of Cards. 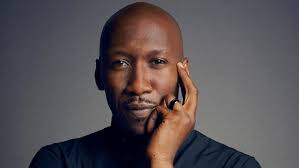 When did you first decide to become an author?

I started writing after I found my post-retirement teaching gigs drying up due to the fallout from the Great Recession, leaving me with lots of spare time. Once I started writing science fiction, I found that I enjoyed it. 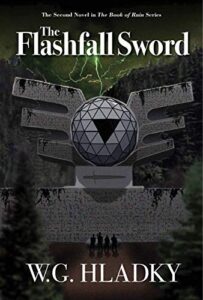 Is this the first you’ve written?

Fiction, yes. I was a newspaper reporter before I became a police officer, and I wrote reams of reports as a detective. I am also a published poet. [NOTE: The second book in “The Book of Ruin” series is called The Flashfall Sword, published in 2019].

What do you do for work when you’re not writing?

I lectured to police officers around the country how violent encounters change their physiology and psychology, and how these changes help and hinder performance. I have two master’s degrees; one in public administration, where I researched police stress, and another in criminal justice with an emphasis on forensic behavior.

How much time do you generally spend on your writing?

Four hours a day when not interrupted.

What’s the best and the hardest part of being an indie?

The best part of being an indie is the freedom to experiment with writing styles and plot lines. I also found myself enjoying working with indie editors and publishers. The hardest part is having to publicize the novel myself.

Would you go traditional if a publisher came calling?  If so, why?

Is there something in particular that motivates you (fame? Fortune?)

Neither fame nor fortune motivates my writing. I am a government retiree receiving what some call an undeserving pension, so I do not need to write to make a living. I enjoyed trawling for ideas while traveling, and have visited most of the places mentioned throughout the novel. By playing around with what-ifs, my writing allows me to alter those places and populate them with interesting characters.

(NOTE: MY EDITOR CURRENTLY IS EDITING “RANGERKNIGHTS,” THE THIRD BOOK IN THE SERIES).

*Those who doubt that claim, read the recently published book, The Year of Dangerous Days: Riots, Refugees, and Cocaine in Miami 1980, by Nicholas Griffin.